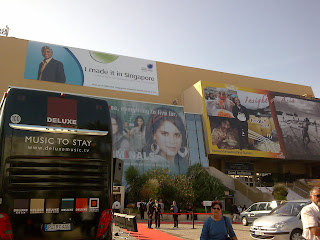 I wish we’d get to music 2.0 first. I mean in a way but music is a good example for how basically there is a restart that goes on in the music business. The old music is driving against the wall and the new industry is just starting and is not really connecting. So the big companies are declining in importance and the new ones are just coming up. And the problem with music is that it was always been dominated by four big companies and cartels and monopolies which isn´t really too bad but it is declining. So the new models with all the new independent companies are just now starting but it's all different business models more like an agency.

According to you, in music industry which kind of model is the most efficient?

Any model based on selling copies id dead. You don’t sell enough copies to get enough money. You sell copies, after you sell a couple of other things now that means selling attention. That means advertising, support, sponsorship, product merchandising, tickets, performances, everything around the music. If you sell that the next thing you can is the copy. So it is the reverse.

There are many existing platforms like Jamendo or Deezer that promote free music for consumers. Do you think at the end the music should be free?

Well I think for a lot of consumer it will feel like free. You won’t think about the music because it is built in. So you buy a mobile phone like orange music max. It’s not perfect at all but it’s a good idea, so it should be free. So what they are going to do is make the music free by integrating smart advertising and product placement. So essentially a 3rd party is paying for the music and then the music becomes a platform for social interaction. And so in the process, it will generate a lot of possibilities for buying other things and that is where the MONEY is.

I think there will be many, many, many more. You have to remember that only 3% of global population are online with broadband. So when all the Indians, Chinese and Brazilians are going online with a mobile phone, everybody will be connected with social network. It’s like you are a member of some social network by default by just being there. So we will have 4 billion people on this network so there is room for a hundred times facebook. But the question is just not that. How will the user join, how will they make money? they will have a hard time making money just by themselves so they will become a member of search engine or a payment company or a film company.

One of your books is called MUSIC2.0. We can buy it physically or download generously the .pdf file for free. So my question is: There is still a future for physical books? What is your feeling about it?

The physical book is a packaged product. You buy the package. You don’t buy the book, you don’t buy the words. You buy the book, the object. So when it comes to product, you don’t actually buy the words, you can get the words for free. People pay for the package. Right now there are 3000 books published per day. And there are many published without publishers even more so a lot of people will not be published their books as a principal product in the future because the contract is very big. So they will publish books as daily chapter on internet, they will publish for the iphone… just to get the audience. And when they will hit the audience, they will say “who wants to print the book?”. And then they’ll make books on demand.

I think for all media, it’s a package question. I’m willing to pay very little for ja few, but when I like them, I’m quite willing to pay a lot for the package. It’s like this. So the books for all the kids for example, will be free.

So you will sign up with a sell phone company or a digital platform, and the book will be accessible with little books, supporting by advertising. But if you like it, if you want the next step, you spend a lot more money… It’s very good news for the creator because it’s very cheap or free to publish on internet, so when you create the audience 50% of them get the product. But it’s very brutal, because if you’re not really good, you’ll never get any money. It’s a hard market but it’s really always in that way.